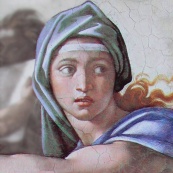 These women were the exception to male dominion in religions. They knew about the paradoxes of the future, something that men forget.

We have seen in the previous chapter (1) how priests began by guessing the future using random. But by inventing the writing in Sumeria they found a new way – apparently objective – to relate events to each other, building a logical bridge between the past and the future.

When an unusual occurrence occurred, for example, the birth of a lamb of strange color, the event was written on a tablet. If a few days later something bad happened to the city, such as a flood, an earthquake or the loss of a battle, it was written on another tablet and tied next to the previous one. From then on “it was written” that the previous event dragged the consequent event with it. If a lamb of the same color was born again, the priests consulted the tablet that indicated that event and the tablet with which it was paired and ran to warn the king that the god was angry and should hurry to make him change of opinion, executing the appropriate sacrifices and rituals. Because, if not, the wrath of God would fall on the city with the announced disaster or other similar.

All this was solemn nonsense. With as much as the Sumerians had learned about heaven and earth, how could they believe in such folly?: Because humans are like that and we are willing to believe everything they tell us, driven by fear, hatred or ambition.

A few years ago, business executives used to make strategic plans for four years (today they no longer dare to do them even for a year. in fact, nobody dares to predict what might happen next week). The prediction in companies was called “forecasting”. The computer equivalent of the clay tablets was the “database”. It was intended to predict the time with “correlations” in serious university projects. Naturally, the future was right only by chance.

That makes me think that we have not changed so much for four thousand years. 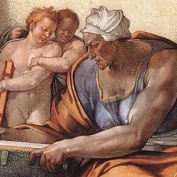 More interesting than the “database” of the Sumerian priests seems to me the role of the Greek prophetesses known as sibyls. The Christian religion appropriated later its memory, assigning them – with retroactive effect – the honorable function of having announced the arrival of Christ. Thus were immortalized sibyls by Michelangelo in these frescoes on the roof of the Sistine Chapel in the Vatican.

Actually, the task of the sibyls was to answer questions from visitors to the temple. Those questions was made in writing after depositing an offering to God. The answers were shaped like paradoxes, meant to make people think. 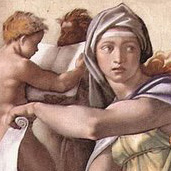 For example, when a powerful Persian fleet approached Athens in 480 BC. C., the sibyl of Delphi advised the Athenians to build “a wooden wall” (2). The plaintiffs were baffled with that response, as a wooden wall would be easily burned and would not prevent the enemy from entering the city. After much thought, they decided to build a fleet of wooden ships and evacuate the city, (before, they buried their statues and treasures).

As the invaders approached, the Athenians themselves set their city on fire. They responded in this way to the paradox (wooden walls) with a counterparadox (to burn it themselves). Athens burned down, but its inhabitants, treasures and statues were saved. Shortly after, the Persian fleet was defeated by the Athenians in the naval battle of Salamis and the Persians had to give up their invasion plans.

The oracle of the sibyl, which seemed so strange, was full of wisdom; not from the logical reason, but from the pragnanz (by the left hand: observe that look to his left of the sibyl of Delphi: how clever Michelangelo was!). The sibyl does not seek to replace the plaintiff’s logic, nor complete it, but to encourage its involvement by means of a paradox that conceals – while revealing – the possible solution.

A historian of the time already said it: – “The oracles do not hide or reveal, they only indicate”. Although in my opinion they did not indicate, in the sense that the index finger of the right hand indicates something determining it, but that it presented (by the left hand) a set of particular and contradictory possibilities, that is, paradoxical, for the interlocutor to find the Exit in a situation with no exit. In other words: to change the context, imaginatively placing yourself in another point of view that would allow you to see the solution

In the example cited, the problem was the probable conquest of the city of Athens by the Persians. By burning it, the city would be lost, but at the same time the invasion would be avoided, because what is the use of a city turned into embers? And, on the other hand, the Athenians would soon rebuild their city, replenishing the treasures they had hidden.

Function of paradox in a dialogue

Today (25 centuries later) we know from Paul Watzlawick (3) that the solution of a pragmatic paradox is a counter-paradox, which consists in applying as a remedy, the symptom itself that one wants to avoid.

In other words: A problematic situation presents opportunities and threats. But when there is no way to avoid the threat, one is in a limit situation. In this case, the threat must be turned into a means for the solution.

Pragnanz is a paradoxical phenomenon, which belongs to existential aesthetics. It is complemented by the determination, which interprets it. And by activating it as opportunity, it deactivates it as threat. And it makes it reasonable. And by the way, it becomes a good story to tell to the grandchildren.

In social conflicts – and a battle is a serious conflict – the oracle was designed to surprise not only those who received it; but, even more, to the enemy. In the naval battle of Salamis, the Greek chief Thucydides displaced the Persians, turning against them the “weakness of the wood“, by pushing them to block their fleet in the narrowness of the Strait of Salamis, which facilitated their destruction.

The existence and prestige of the sibyls is one of the few signs of respect for female intelligence that are outlined in the history of that time and in any other later.

With the hegemony of Christianity, intuitive intelligence was considered demonic and the women who practiced it were accused of witchcraft and ended many of them at the stake. Everything that the priests did not understand (which was almost everything that came out of their dogmas), was condemned as evil.

This rule of exclusion of feminine thought (4), is confirmed by its few exceptions: such as the sibyls represented in the Sistina chapel, the Christian martyrs venerated as saints and, especially, the Virgin Mary, considered by Catholics as Mother of God . What better than some exceptional woman to highlight by contrast the omnipresent male power in heaven and on earth?

The women were reduced to vases on the altar of male power. But that does not always work as expected by those who rule, because there have also been exceptional men who are traitors to their sex. In this Final Judgment of the Sistina chapel, the double feminine and masculine vision of the brilliant painter shows us the Mother of God dwarfed and ignored, who looks the other way, while her divine Son exhibiting muscle and without his pulse trembling, sends to those damned to hell.

And that each viewer draw their own consequences. What did the priests do when they saw this painting? They were scandalized and ordered to paint underpants to cover the genitals of the characters.

Towards the fourth century BC C. Logic was developed in China, India and Greece. It was an important advance in human thought, thanks to which was developed the science… until Newton.

However important it is, logic only represents half of the process in human thought. And in objective reality, not even that. The universe is only logical in some simplifiable aspects, such as the movement of the stars, gravity within certain limits and machines before the 21st century.

The superstitious Sumerian priests (or of any archaic society) and the amazing sibyls are a good example of the contradiction in our double human condition, on the left and on the right. When we lose collaboration between both sides, we become a broken toy, a helpless howling animal. Or a robot chattering meaningless: that executes logical instructions, without understanding the context.

To interpret, among theologians and sibyls, I choose the sibyls. They gave a paradoxical interpretation and not the solution, which the interested party should find. They worthily represent the first half of the thinking process; The big question: “What to do?”

This is how human thinking and dialogue between humans work: a) with pragnanz: influence of the particular, multidimensional, contradictory and therefore foggy; b) with determination of who plays it, and that in a combat situation, even in a borderline situation, will deceive the enemy, taking him off guard.

That dialectical game (of dialogue and confrontation between different parties) is what makes us human and adaptable to this universe. Our thinking, like our existence, is a zigzagging movement (5). That seems undecided, but it has been and will remain decisive for survival.

Dialectical or metaphysical thinking?
Philosophy was born in Greece in two divergent ways, by the left and the right: the mortal and the immortal. Logically, the second quickly crushed the first.

Creating gods was a mistake

(4) Social censorship, turned into mental censorship by the macho blindness of the right hand, leads to the denied possibilities.
…– See:

(5) Jorge Oteiza’s sculpture “Par 3-5 mobile”. It is formed by two semicircles of sheet, joined asymmetrically by its diameter. If it starts rolling, it moves like an egg, with an irregular, zigzagging swing. 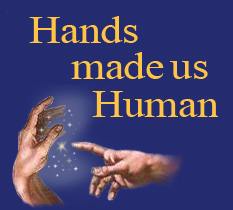